Paul Kessel is a street photographer from New York City where he was born and has lived most of his life. With a previous career in clinical psychology, psychoanalysis and university teaching, Paul started his photography journey just before his 70th birthday, enrolling into photography classes at The International Center of Photography. Over the course of his studies he developed a strong interest in candid street photography. Now thirteen years later, Paul has been in over eighty group exhibitions, has had four solo shows, has won a number of awards and has had his work published.

Paul's style has evolved from asking people to photograph them, to candid portraits, to candid street scenes. He once was a competitive amateur golfer and he treats street photography as a sport, comparing the similarity to playing golf. "Usually a warm-up period is required, then some momentum is established, and there is a good shot among many forgettable ones."

Until the pandemic, Paul rarely missed a day of photographing. That has essentially stopped in recent months. He has partially satisfied his itchy shooting finger by doing a self-portrait project at home. But he is very eager to get back out shooting on the streets again.

Paul shares with us his photography series 'Hauptbahnhof', about the main train station in Frankfurt, Germany which is a major hub for travel in Europe. It is a place that Paul has spent a lot of time there and some of that time was personally meaningful to him. All his photographs are candid, each telling a story, isolating his subject among layers of commotion of the main train station. 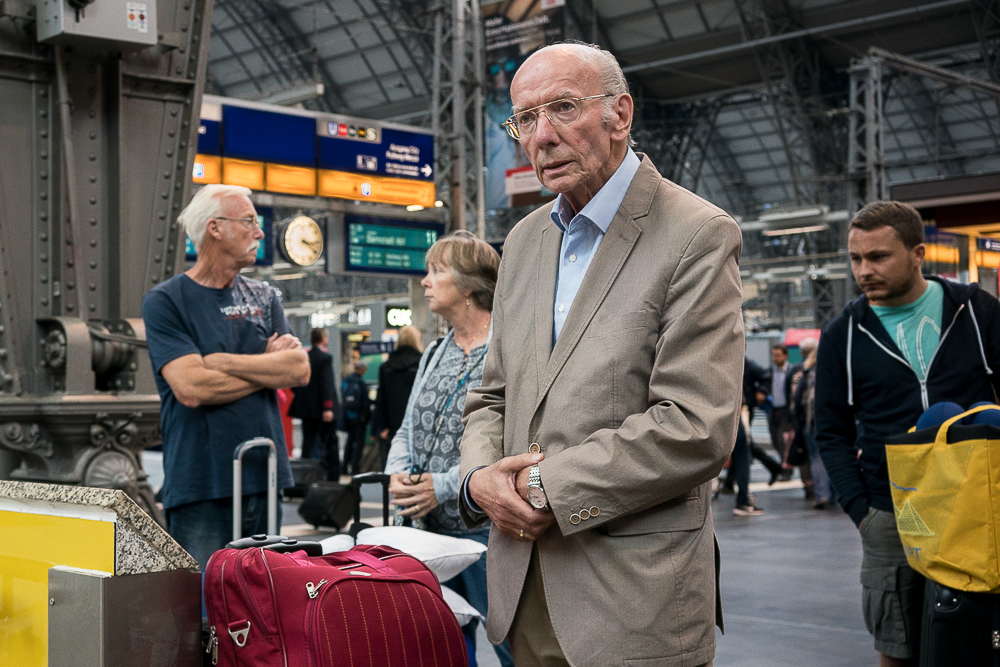 Tell us more about your project 'Hauptbahnhof'.

Over the past fifty years, I have been to Frankfurt Germany almost yearly and I also lived in the city for two years. Of course, over all of that time, many life events occurred including highly emotional ones, particularly divorce and child custody issues. Countless times, I have passed through the main train station. It is called 'Hauptbahnof'. After I began candid street photography, about eight years ago, I became more aware of light and this venue has an interesting skylight. Because of that, I went there to photograph. I had no project in mind beyond photographing people that interested me and doing it fairly close up. Eventually, I had enough photos to think of it as a project.

You mentioned that you went unnoticed. How did you do go about achieving this?

My camera has a flip down back screen, and I looked down at it after I spotted a potential subject walking through or standing in decent light. I pretended I was fiddling with the camera.

What drew you to photography or is it something that you were always interested in?

I always owned a camera and had a latent interest in photography. However, it was put away in a drawer almost all of the time. There were relatively infrequent periods of photographing until I decided to pursue it seriously in 2008. The primary reason I began, is that my daughter started a career in photography at age 23. Her mother had an MFA degree in video and prior to her video interest, she studied photography in college and photographed my daughter a lot. My daughter eventually became a prop stylist and frequently works with photographers.

Where do you find your inspiration?

I am inspired by my enjoyment of the process, the quest for the elusive exceptional photograph, the sense of belonging to a community of street photographers, friendships with others pursuing the same goals as myself, and probably the hope of making enough good pictures to have a published book.

The aesthetics of light and composition coupled with a lifetime fascination of people and how they present themselves is sufficient. In more recent years, I have become more interested in how the photograph will look than the people in the photograph. Occasionally, a social issue may be part of what I am trying to express.

Who are your favourite artists/photographers? Who has mostly influenced your style?

There are many photographers whom I admire. This includes those in the history of photography, teachers, and contemporaries. I will not attempt to mention them all. I don’t dare mention contemporaries as I don’t want to be in the position of excluding some of my friends. A good number of them are becoming well known as street photographers.

Most certainly, Cartier-Bresson, Winogrand, and Meyerowitz have been big influences. Alex Webb and Constantine Manos have been as well. I mention the latter two separately because the way Webb includes multiple layers and multiple activities in some of his amazing compositions and how Manos fills the frame are both inspiring and frustrating. I go after it, but I can’t do it. The quest keeps me going.

What has been the best advice/criticism you have ever received...that you have learned from?

1. Appreciate the friendships derived from photography and don’t be so hard on myself regarding outcome.

2. Fifty really good pictures in a lifetime is success.

Where is your favourite place to shoot?

The vast majority of my shooting is in New York City. My favourite spots there have been Coney Island, Fifth Avenue, and Soho. Abroad, I enjoy shooting in Copenhagen and Frankfurt. I have found that searching for a good location is the most difficult part of the process.

Do you prefer to shoot alone or with friends?

I usually shoot alone. However, I find that some of my better photographs come when shooting with others. I function better with companionship. I find that this is true for me among many activities.

How does the equipment you use help you in achieving your vision in your photography? Do you have a preferred lens/focal length?

I am often out for many hours at a time and I do not want to be burdened by heavy equipment. All I carry is one camera with one prime lens. I prefer a full frame camera. That preference increases the weight a bit. I either use a Sony A9II mirrorless camera or a Leica M10. With both I use a 35mm lens. If I know that I will be shooting in a setting with a dense crowd, I use a 28mm lens. The cameras in this project were a Sony A7s in the beginning followed by a Sony A9. All pictures were made with a 35mm lens.

What would you say to someone wanting to start out in your genre of photography?

My advice to someone starting out is to use one camera only with one prime lens. For candid street photography choose a 50mm lens to start out. Once there is no longer discomfort getting close, graduate to a 35mm or 28mm lens. It is a matter of preference. One learns better and faster by avoiding a zoom lens and making your prime lens focal length part of your vision. Zoom with your feet.

Are there any books that you have read that have inspired your creativity and that you would like to recommend to us?

Whenever I am asked this question, two books come to mind. They are Psychoanalysis and Zen Buddhism by Erich Fromm and Letting Go of The Camera by Brooks Jensen. I read both a long time ago and by now they may not resonate with me as much. Street photography books by the usual suspects (Cartier-Bresson, Winogrand, Webb, and many others) are important to me.

Have you ever been involved in the artistic world before photography?

No. I have no background in art. What may be relevant is that as a child I hung pictures by Dali and Bosch in my room. These paintings may be precursors for my preference of “busy” and layered photos. This is not apparent from the particular project shown here.

Are there any special projects you are currently working on that you would like to let everyone know about?

Because of the current pandemic, I have been doing self-portraits at home. I yearn to return to the street. For me, projects are rarely conceptualized. Instead, projects emerge from the edit of random photographs. It may be true that at times I do have a series in mind as I shoot as well.

My goal is to make about twenty more good pictures. I believe that I currently have about thirty. My criteria for “good” is high. It is easy to get “OK” photos. I don’t mean that. I am not referring to candid portraits. My interest is now more complex street scenes involving people. I am hoping a book can come out of it. At the age of eighty-three, I am not in a position to worry or plan for five years from now.

“When I am not out photographing, I (like to)…”